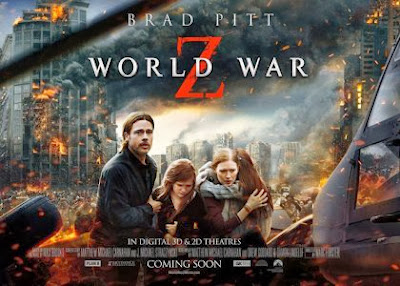 Ex-United Nations investigator Gerry Lane (Brad Pitt) has quit working for the UN to settle down and spend more time with his family, his wife Karen (Mireille Enos) and two daughters, Rachel (Abigail Hargrove) and Constance/Connie (Sterling Jerins). During an otherwise normal day the family finds themselves in the middle of a zombie-like virus outbreak.

Gerry calls on his old friends from the UN who send rescue for him and his family and take them to  the UN Atlantic Fleet where Gerry is given an ultimatum, come back and work for the UN and go to Korea to try and find the source of the disease, or he will be of no importance to the UN cause, and he and his family will have to leave.

Knowing the fleet is the safest place for his family Gerry sets off with a small team to try and figure out where this virus came from and if it can be stopped. This search takes him from Korea to Israel, all the while leaving his family behind, but at least knowing that they are safe.

Eventually Gerry ventures to a medical research facility in the hope of creating some sort of cure or vaccine.

I have always loved Brad Pitt, not for any other reason than he has always, in my mind, acted amazingly in all the movies I've seen of his. World War Z is no different. He plays Gerry Lane beautifully. He makes you really believe that he is the father of this family, and that he would really do all the things he does, for them. Gerry is played as a character with some basic skills but realistically is an everyday man making do with what he's got. At one stage in the movie he makes great use of household items, by first duck-taping a knife to his gun and then magazines to his arms to shield them. Little things like this make me enjoy movies more, when I believe what I'm watching, because lets face it, it is annoying when everyday people, in the event of an apocalypse, suddenly have heaps of weapons handy, and know how to use them all... sometimes we gotta make do with whats around the house.

Gerry's wife Karen, played by Mireille Enos, was also a very strong character also and played well. I had never seen Mireille in any other movies but I felt she fitted the movie perfectly as Gerry's wife. Karen is a strong woman, and equally as passionate about her family, however she also has this realistic house-wife vulnerability. Too often do I see women portrayed as going from normal woman with no defensive skills to quite suddenly being able to use a variety of weapons and fight off multitudes of people. And yes I am bringing this point up again. But sometimes that really ruins movies/books for me, when everyday people turn into super hero's.

I also loved that they included children in the movie. World War Z is one of those movies where you become so drawn in your sitting on the edge of your seat, anxious for them to get through, appreciating the sheer terror and, for use of no greater word, "shit-ness" of the situation, all made worse by the fact that you have two completely defenseless children with you. The children were played very well by Hargrove and Jerins and I feel we do have to make a note of them here. The girls both play their parts skillfully, both portray the girls as frightened and scared. And again it was hard to remember these people were not a real family. They all went so well together and I felt that the family was more relatable and realistic in that vulnerability that they portrayed.

Some other great cast members included Fabrizio Zacharee Guido who plays a young boy the Lane family cames across while trying to escape the city. His family lets them stay the night and when his parents are killed the following morning the Lane's do not hesitate in taking him into their own family. Fabrizio, while not in the movie a great deal, does a fantastic job when he is.

And the other cast member I just have to talk about is Daniella Kertesz who plays Segen, an Israeli soldier escorting Gerry whilst he is in Jerusalem. During the city breach Segen is bitten on the hand, and without thinking Gerry quickly cuts it off. It is a truly horrific scene and Danielle deserves congratulations on this scene alone. She portrays Segen's immediate response, shock, followed by the realization that her hand has JUST BEEN CHOPPED OFF to which she responds a little more appropriately and screams.

The cast works so well in this movie, I feel, because there have been so many un-known actors sourced. Many of the main cast have not appeared in a large production like this, and have appeared in mostly short films. I like that about the movie because you could enjoy the actors and their characters without that thought in the back of your head always comparing them to roles in other films. It's kind of like how you can't really watch anything with Daniel Radcliffe without thinking of Harry Potter.

The movie itself was one I had heard was about zombies, and because of that I wasn't sure what to expect. With themes of "end of the world" and various apocalypses including "zombies" being a big thing the past few years, I really felt I had seen enough. But World War Z added several spins to the typical undead favourite. For example they had a slow "dormant mode" but when there was a stimulus, whether it be a human they can see or various loud noises, they became like... well this is how I described it at the time... sack monsters! They really are a different kind of terrifying. They throw themselves, and their weight, around in a very animalistic way, smashing their heads and shoulders through doors and windows. When in a group they collectively build themselves up to reach heights.

This is the best example of their power in numbers.

The movie storyline is fantastic. And I really can't express how realistic and relatable this survival story actually is. I think the film did a great job of incorporating multiple cut scenes and shaky camera with more stable longer shots. There were also some amazing wider shots of masses of zombies doing their thing. My favorite was in one scene they're on a plane that is about to take off. The camera shows the runway and there are just thousands of zombies running along either side of it. When active they move so fast and into every gap, throw themselves off anything, they reminded me of water when in a massive group like they so often are in this movie. There is not a few zombies here and there, it is a widespread epidemic creating chaos beyond imagine and the film does a great job of showing the destruction at both a close up personal view and also from afar, looking at a whole city, or large area.

I would really love to go into more specific details of the movie but really it would spoil it for anyone who hasn't watched it. So instead I've given you a bit about it. It really is an amasing film, and it's been a while since Ive said that about a film, but this one really was great.

Check it out now!

Posted by Sammie Pacific at 7:14 am